Chinmaya Mission of Trinidad and Tobago (CMTT) was inaugurated on October 2, 1997 (Gandhi Jayanti). In 1999, the Mission acquired more than 2.5 acres of land in Couva. CMTT’s membership began with only three persons and stands today at over 2,000, spanning throughout Trinidad

The heart of the Mission is its Couva ashram, administered under the able guidance of resident Acharya, Swami Prakashananda. Acharyas serve year round conducting various classes, satsangs and discourses across the Island.

CMTT sponsors an active, year-round program of courses and discourses on sacred texts, and devotional and meditation practices that are aimed at making the teachings of Vedanta accessible to individuals of any background. Spiritual, cultural, and social service activities are also offered.

CMTT’s ashram facilities include a temple and lecture hall, a high school, two pre-schools and primary school, the first Chinmaya Vidyalaya outside of India, and three residential hostels to accommodate students and guests. The Vidyalaya now have satellite centres in Debe, Gasparillo, Esmeralda, Barrackpore, Munroe Road and Chaguanas. 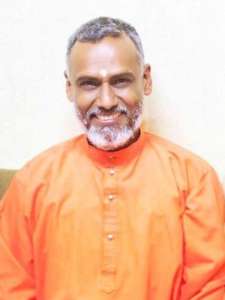 During His tenure as a young college student at the York University of Toronto, a fortuitous meeting occurred when Swami Prakāśānandaji attended lectures on Hindu Philosophy conducted by none other than our Pūjya Gurudev Swami Chinmayānandaji. Immediately inspired, Swamiji sought entrance to the Vedanta Course in Sandeepany Sādhanālaya, Mumbai. Upon completion of His studies in 1994, as Brahmachāri Prem Chaitanya, Swamiji was assigned to give discourses at various Mission centers in India and Nepal.
On the auspicious occasion of Maha Shivarātri 2005, Brahmachari Prem Chaitanya was conferred Sanyāsa Dīkṣa (order of renunciation) by Pujya Guruji Swami Tejomayānanda, Head of Chinmaya Mission Worldwide. He then returned to His native Trinidad, establishing the Chinmaya Mission Ashram on 2nd of October 1997 and thereby commencing a nationwide effort to revitalize Hinduism through spiritual classes, education, and widespread community outreach.
Swamiji has conducted hundreds of Yajñas, Satsangs, discourses and spiritual camps as well as classes in Vedic Chanting and Sanskrit across Trinidad & Tobago as well as abroad. Swamiji has also taught two Residential Vedanta Course batches in Trinidad & Tobago, 2013-2014 and the recently completed session from 2016-2018.
Under His guidance Chinmaya Mission Trinidad & Tobago is now home to the sprawling Chinmaya Vidyālaya Pre-Primary and High School educational institution spanning seven campuses and counting. Widely regarded nationwide as an outstanding academic and spiritual educational institute, it continues to grow every year.
Through His great dynamism, selfless disposition, humility, charisma, and astute leadership style, Swamiji is loved by all for His peerless dedication to Sanātan Dharma and the Vision of Pūjya Gurudev. In addition, Swamiji has spearheaded numerous charitable projects assisting needy communities and families. In recognition of these efforts, Swamiji was awarded the national Chaconia Gold Medal for long and meritorious service to Trinidad and Tobago in 2012.
Swamiji has a bachelor’s degree in Political Science and Philosophy from York University in Toronto, as well as a law degree from Benares Hindu University. 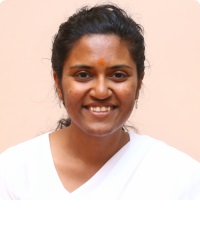 Brahmacharini Akalka
Brni. Akalka was raised in New Orleans, Louisiana and then San Diego, California. In 2013 she arrived in Trinidad & Tobago to attend the 2013 Residential Vedanta Course under Resident Acharya Swami Prakashananda, Head of Chinmaya Mission Trinidad and Tobago.
Upon completion of her studies, Pujya Guruji Swami Tejomayananda posted her to serve in Trinidad and Tobago. Under the guidance of Swami Prakashanandaji, she taught Sanskrit during the 2016-2018 Residential Vedanta Course batch of Chinmaya Mission Trinidad and Tobago, as well as in the IV and VI Youth Empowerment (YEP) Courses conducted by CHYK West under
Swami Sarveshanandaji.She is now serving the Mission in various endeavors, including teaching Sanskrit in the Chinmaya Vidyālaya, conducting Satsangs and study classes across the Island as well as abroad. 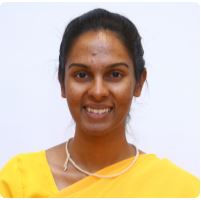 Brahmacharini Kritika Chaitanya
Brahmacharini Kritika Chaitanya was born in Toronto, Canada. After studying International Development Studies and Philosophy at the University of Toronto and engaging in much social work and volunteerism, she joined the 2nd Residential Vedanta Course at Chinmaya Mission Trinidad and Tobago Ashram in 2013. After a year and a half of studying the highest knowledge and Sanskrit under the guidance of His Holiness Swami Prakashanandaji, she has committed herself to serving Chinmaya Mission. She is currently posted in Trinidad, conducting public satsangs and classes for adults, seniors and young females, and assisting with Ashram activities and enterprises.

Brahmachari Dvijot Chaitanya
Brahmachari Dvijot Chaitanya was born in Mahaica River, Guyana, where he spent many years studying secular and religious education at Ashrams and Temples. After obtaining a B.A in Social Work, he traveled to Trinidad to join the 2nd Residential Vedanta Course at Chinmaya Mission Trinidad and Tobago in 2013, under the tutelage of H.H. Swami Prakashananda. Following the two-year intensive course studying the Vedas, Upanishads, Bhagavad Gita and Sanskrit, he chose to continue on the path of jnana (knowledge) and was initiated in August of 2014. Dvijotji has been traveling between Trinidad and Guyana, conducting classes in Hinduism, meditation, Bhagavad Gita chanting, holding public satsangs and managing various Ashram activities. 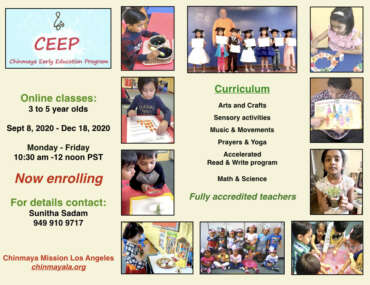 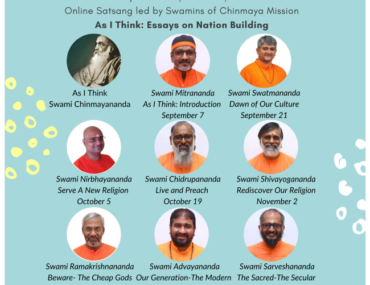