As in all Mission centers, the primary goal of Chinmaya Mission St. Augustine, Chinmaya Govardhan, is to honor and serve Pujya Gurudev’s vision by sharing the Vedantic knowledge He gave us. The name Govardhan itself expresses beautifully what we hope to achieve here, since “vardhana” means that which uplifts, nourishes, or gladdens, and “go” refers to the Vedas, mind, senses, earth, and cows. As the Lord showed in His Govardhan-lila that He is the ultimate refuge of all beings, so too, we envision Chinmaya Govardhan as a place where people of all backgrounds can seek and live the Truth through Vedantic scriptural study and Self-inquiry, where body and mind can be uplifted through healing awareness and devotion to God, where we can practice living in harmony with the environment. The center is located one hour from Jacksonville International Airport and is 20 minutes away from St. Augustine’s beaches, Nature preserves, and other tourist attractions. We had our first retreat on the auspicious weekend of Radhashtami. Since then, we have held more retreats and workshops, where CM center’s devotees, collectively and individually, have visited, served, and spiritually unfolded. 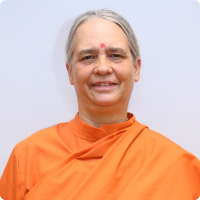 Swamini Radhikananda
Swamini Radhikananda first heard and met Pujya Gurudev Swami Chinmayananda in 1978 in Washington, D.C. and in his presence her deepest longing had found its fulfillment and life’s direction. While completing college degrees in English Literature and Special Education she attended the local, weekly Vedanta study-group that had formed and also saw Gurudev every summer when he came to the States to conduct 10-day Family Camps. Finally, hearing the call to deeper study and spiritual practice, she joined Chinmaya Mission’s intensive, two-year Vedanta Course of study in 1987 at Sandeepany Sadhananalaya in Mumbai, India in 1987, and was blessed to be taught by Pujya Guruji Swami Tejomayananda. Upon returning to the United States in 1989 as “Brahmacharini Arpita”, she served, successively, at the Washington, DC, Krishnalaya and LA Mission centers teaching regular classes on the scriptures as well as children’s Bala Vihar® classes at weekly programs and summer Chinmaya “Family Camps”. Since 2003, when the beautiful 17.7acre property, now known as “Chinmaya Govardhan”, was bought and established as the site for Chinmaya Mission St. Augustine in 2003, Swamini Radhikananda has been residing and conducting classes and retreats in the St. Augustine, Florida and surrounding areas on Bhagavad Gita, Upanishads, Shrimad Bhagavatam and other Vedantic texts.
On Mahashivaratri Day, February 17th, 2015, she was blessed with initiation into Sannyas by Pujya Guruji Swami Tejomayananda and given the name Swamini Radhikananda.
In addition to regular classes, Swamini enjoys giving yearly presentations on Hinduism to university Comparative Religion classes, general talks on Bhagavad Gita and Vedanta to western Yoga Teacher-Training students, participating in local Interfaith programs, and giving occasional day-retreats in combination with other local, recognized teachers of Yoga, Ayur-Veda and other related topics. She also enjoys devotional singing and composition and has made several CD recordings for children including “Come to Me, My Krishna”, “His Eternal Smile”, “Listen to the Wind”, and “Songs for the Light”, a CD of eastern/western kirtan music for all ages (available from Chinmaya Publications). She considers it her greatest joy and privilege to serve in Chinmaya Mission by sharing the life-transforming teachings of Vedanta with other aspiring seekers from any background. 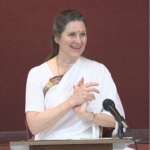 Vilasini Balakrishnan, of Chinmaya Mission Washington Regional Center (CMWRC), spent her teen years questing for the meaning of life, and found her answer in India during her Junior semester abroad as a comparative philosophy student.  The greatest fortune of her life was meeting Swami Chinmayananda and beginning her Vedanta sadhana in 1975.  She graduated from Tufts with a B.S in philosophy, and in 1978, she graduated from the Mission’s two-year Vedanta course at Sandeepany Sadhanalaya in Mumbai.
Vilasiniji and her family organized Pujya Gurudev’s first Jnana Yajna and Study Group in Washington D.C. in 1978.  Until 1981, Vilasiniji served Chinmaya Mission in Flint, Chicago, Boston, and Bay Area, where she taught Vedanta, Bala Vihar, and Study Groups.
From 1981 to 1984, Vilasiniji had the great blessing to serve as Pujya Gurudev’s secretary, traveling with Gurudev to all his yajnas, videotaping his talks, and performing secretarial duties.
In 1984, she was assigned as Editor of CMW’s (Chinmaya Mission West)  Mananam series.
In 1986, Vilasiniji and her husband Suresh moved back to Washington, DC.  Both were founding members of CMWRC.  Gurudev also placed Vilasiniji on CMW’s Board of Directors and later appointed her as CMW’s Executive Secretary.
Vilasiniji became a licensed professional counselor and practices family and marriage counseling, in addition to teaching Vedanta classes for adults and serving as CMWRC’s Regional Bala Vihar Director.  She loves teaching meditation and also Yoga Nidra to adults as well as youth.  Her Spiritual Parenting workshops are extremely popular.
People say of Vilasiniji, “She is always smiling, just as Gurudev tells us to Keep Smiling.”
She brings a natural wisdom and compassion to her classes and loves sharing with people the Science of Happiness that is Vedanta. 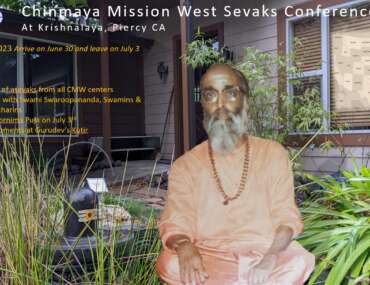