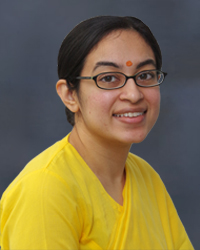 Brahmacharini Shweta Chaitanya
A Hindu chaplain aspires to lend open ears and presence for anybody who may be seeking spiritual support in their lives. Over the years chaplains have been providing this type of care in a variety of spaces such as universities, hospitals, hospices, the military, and many more. Hindu chaplaincy as a recognizable entity is rather new, although there have been a few Hindu chaplains who have been doing this work for many years. In addition to providing care and presence, the Hindu chaplain is someone who can support those who are interested in learning more about Hindu traditions, applications of Hindu ideas in a contemporary setting, and explorations into one’s own Hindu identity. While providing support for the Hindu community, Hindu chaplains also make themselves available to the community at large, providing support and learning from traditions outside of their own. As the Hindu Chaplain at Emory University’s Office of Spiritual and Religious Life, Shweta will be lending support to the community of those who identify as Hindu, those who are interested in learning about Hindu traditions, as well as the interfaith Emory community at large. This will take place through pastoral care, community outreach, interfaith dialogue, supporting student groups, and facilitating events on campus.