Chinmaya Mission Buffalo began with four families in the early 1990s. Jnana yajnas and Study Groups were held in the homes of various devotees.
In 1994, with the blessings and guidance of Pujya Guruji Swami Tejomayananda, a managing committee was formed and Dr. Sagar Loganathan was appointed as President. The satellite was officially inaugurated by Swami Shantananda (CM Princeton) in the Fall of 1994.
Soon, Pat Loganathan started a Bala Vihar® in her home with four students. The classes were conducted from home to home and through steady growth, eventually moved to a rented facility at the local temple.
Through the dedicated efforts of the Loganathans, CM Buffalo hosted many jnana yajnas by Pujya Guruji Swami Tejomayananda, and other CM acharyas, such as Swami Shantananda, Swami Purushottamananda, Swami Ishwarananda, and Swami Chidatmananda.
CM Buffalo now has an active Bala Vihar, in which many parents serve as sevaks. Various festivals are celebrated annually and students perform year-end cultural programs. Invited Chinmaya Mission West acharyas for Bala Vihar weekend camps have included Swami Siddhananda, Swamini Shivapriyananda, Brahmacharini Aparna Chaitanya, and Brahmachari Krishna Moorthy.
In a few years, CM Buffalo hopes to incorporate and acquire its own property to conduct all its classes and special events. 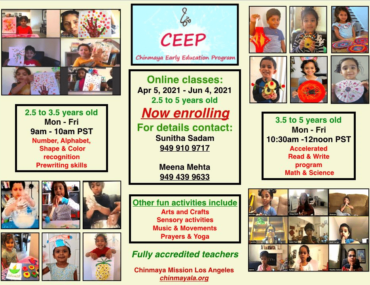 Chinmaya Early Education Program (CEEP) has successfully completed the first and second trimester of our online programs for 2.5 to 3.5 years old and 3.5 to 5 years old children. The online classes were conducted… 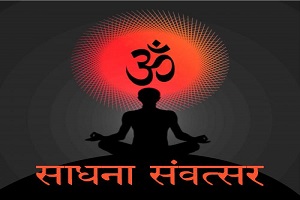 Sadhana Samvatsara is a new initiative, organized by Chinmaya Mission Los Angeles to observe 2021 as a year of prayers, contemplation and meditation. This virtual program will be conducted every weekday from 6 pm to…