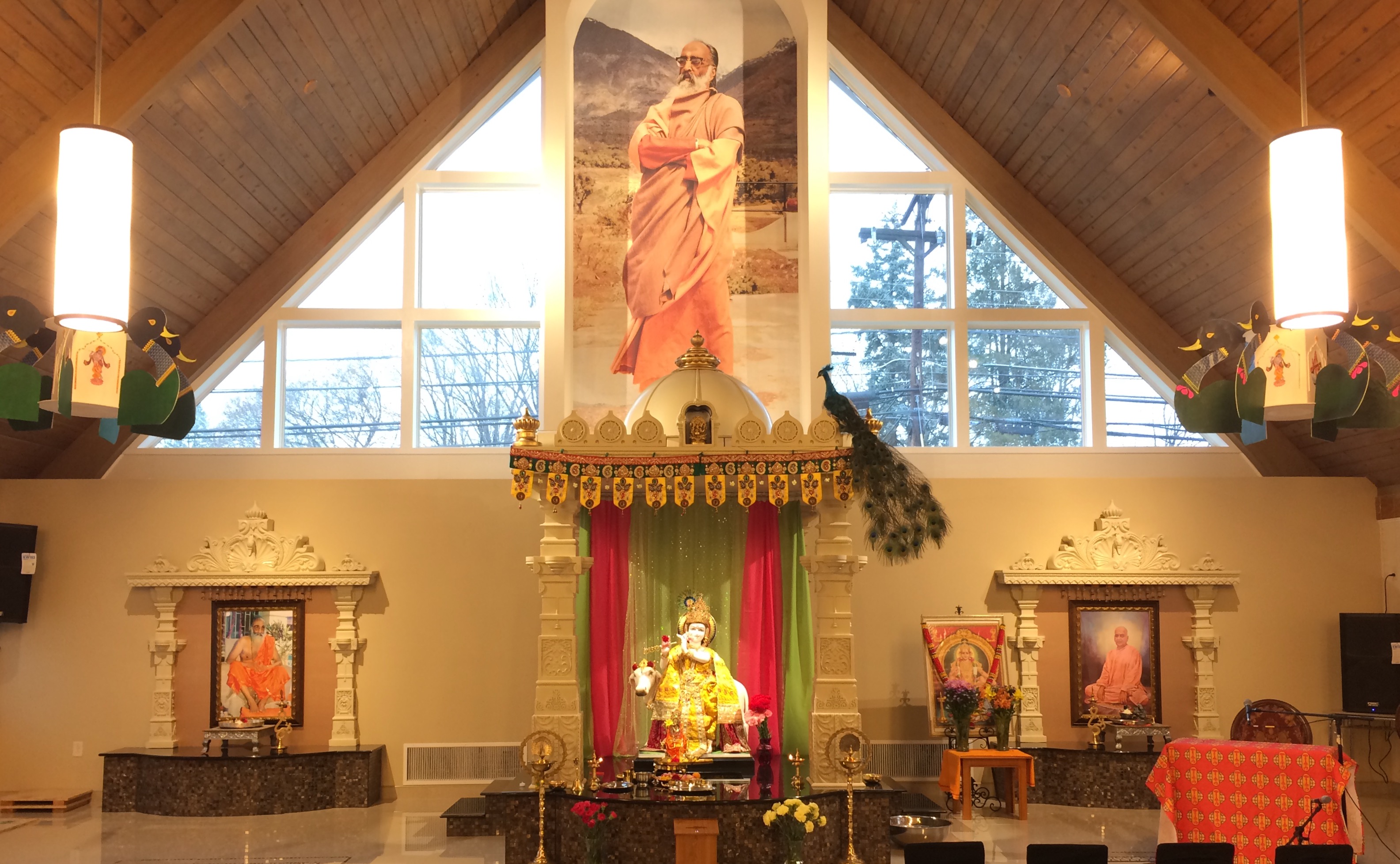 Chinmaya Madhuvan is one of the latest centers located in Yardley, PA. Our typical Sunday morning, is a buzzing bee hive of activity. Over 70 children and adults descend into the campus of Chinmaya Madhuvan, bright eyed and ready for 2 hours of fun and learning. Children ranging from 4 years to 17 years sit in rapt prayer to mark the beginning of the Bala Vihar® classes.

Our beautiful Chinmaya Madhuvan also houses a Lord Krishna Temple where families participate in religious ceremonies officiated by a learned priest. Be it a fun environment for learning for children, an interactive spiritual study session for adults, a religious experience for the devoted or a peaceful refuge for the seeker, our ashram caters to everyone’s needs.

Located in Cranbury, NJ in the midst of picturesque and peaceful farmland, the Chinmaya Vrindavan Ashram was established in June 2001 with the blessing of H.H. Swami Tejomayananda. 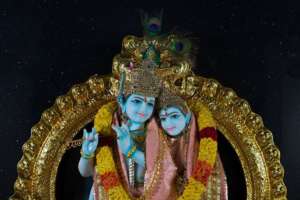 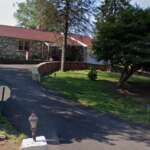 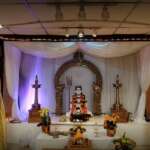 Inaugurated in 1992 by Param Pujya Gurudev Swami Chinmayanandaji. On November 1992, Pujya Gurudev was present at the sanctification of Lord Kedar. Lord Kedar is an unusual representation of Lord Shiva. Lord Kedar represents a moment when Lord Shiva, having just risen from a spell of meditation, has had his bath. Glowing with the radiance of the Truth, He is joyfully, yet peacefully, blessing the Rishis and Gods who have assembled to witness His Glory.

Just as a Kalpvrksha fulfills the desires of a layman, Chinmaya Mission has been fulfilling the spiritual aspirations of millions of devotees across the globe since its inception in 1950s. Inspired by His Holiness Pujya Swami Chinmayananda Vedanta Study and Satsang classes have been ongoing in Philadelphia area since long. Pujya Swami Chinmayananda ji visited Harleysville area several times during 1980-90s.
As a culmination of efforts by Shri Chanduhaiji Patel and other families Chinmaya Mission Harleysville (CMH) Bala Vihar® was started in 2009. Pujya Guruji Swami Tejomayananda ji during his 2011 visit to CMH approved the proposal for an ashram in Harleysville area.
With the financial support from Chinmaya Mission Acharyas, Swami Shantananda ji & Swami Siddhananda ji, a four acre land was purchased by CM Tri-state Center (CMTC) in Harleysville PA in 2011 for the proposed mission building. Pujya Guruji during his visit in May 2012 named the center as “Chinmaya Ramalaya”. The new ashram will consist of a shrine of Shri Lord Rama parivar, well equipped Bala Vihar class rooms, auditorium, Yoga studio, Community hall, and Dining facilities.
Chinmaya Ramalaya
Address: 991 Lucon Rd. Harleysville, Pennsylvania 19438
Phone: (215) 256-8288
E-mail:
cmharlesyville.balavihar@gmail.com

Chinmaya Ramdoot, earlier called as BBNJ center was blessed and initiated on January 2nd, 2000 at
Basking Ridge in one of Chinmaya Sevak’s residence. Started by few families, we grew very quickly. BBNJ
center activities were then moved to Bridgewater High school to accommodate more classrooms for
Balavihar.
Under the guidance of Swami Shantananda, our center activities are now spearheaded by senior Sevaks and Volunteers. For more than a decade many camps, study classes and cultural programs catering to the spiritual needs of all age groups were conducted by the balavihar families in our centre.
Ramdoot has been serving as the satellite centre of Chinmaya Mission Tri State Centre (CMTC) activities at Basking Ridge/Bridgewater and has been carrying forward the noble work for nearly two decades to realize the Missions motto: “To give maximum happiness to maximum number for maximum time”.
All activities of Ramdoot are focused on fulfilling the vision-”To provide to individuals from any background, the wisdom of Vedanta and the practical means for spiritual growth and happiness, enabling them to become positive contributors to society”.
The centre conducts various activities like regular Satsangs, “JnanaYagnas”-lecture series on Hindu scriptural texts, spiritual camps for all age groups, music events, and celebration of festivals in traditional manner. Regular study classes for children, youth and adults are also conducted to make life happier and the world better based on the guidance from Indian scriptures. We hope to meet you soon at Ramdoot.

Mesmerized by Pujya Gurudev, Swami Shantanandaji in sixties, then Br. Raghavan, went to serve for the Master for almost two years as his traveling secretary. After completing his Vedanta course in Mumbai, Swamiji then traveled to Taiwan where he successfully managed his own business while teaching Vedanta part-time. He has been instrumental in building the Chinmaya Mission in Hong Kong, Taiwan and other parts of the world. Since 1992, when he was given Sannyas by Pujya Gurudev, Swamiji has dedicated him life to the full time teaching of Vedanta in the Pennsylvania, New Jersey, New York area.
As a speaker, Swamiji’s talks are filled with wonderful insights into life and people respond instantly to his wisdom and affectionate nature. In 2001, Swamiji undertook and completed 50 Geeta Gnana Yagnas all around the world as his personal tribute to Param Pujya Gurudev.

Swami Siddhananda, a graduate from Kerala University, joined Chinmaya Mission in 1972 at Sandeepany Sadhanalaya, Mumbai and studied Vedanta under Swami Chinmayananda. He was one of those fortunate to meet Gurudev in his youth. He decided early on that he must follow wherever the Master led him. He served at the Chinmaya Mission Chennai for many years and also at the Chinmaya International Foundation Cochin for a few years. He made significant contributions to the monthly magazines Tapovan Prasad and Bala Vihar®.
He has inspired generations of youngsters through his love and dynamic active association with the Chinmaya Yuva Kendra and worked with them in many spiritual and social projects in Chennai, India. Swamiji is the resident Acharya at Chinmaya Mission “Kedar” at Langhorne and also the in-charge of Chinmaya Mission West Publications Division for the last 11 years.
He is today the man behind the success of revitalization of the sales of the Chinmaya Publications in the west. Swamiji regularly conducts Satsangh, Camps, and many youth/Bala Vihar classes in Tri-State areas and also visits the Chinmaya Mission West centers. He is an artist and a singer, has composed many Bhajans and has brought out CD albums. The most famous among them are Hari Om Smaran, Shivoham, and Sivam Sivakaram Shantam. 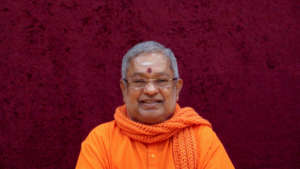 Swami Shantanandaji is well known for his unparalleled devotion to Lord Krishna and for his absolute devotion to his Guru, Swami Chinmayanandaji. Due to this unique qualification that Swamiji possesses, many devotees come to him from diverse backgrounds, cultures and geographies, and discover Self-knowledge through the study of major Upanishads, Srimad Bhagavad Gita, Srimad Bhagavatam, Ramacharit Manas, and Narayaneeyam (to name a few).

Swamiji served his Guru as a traveling secretary for two years and became sannyasin in 1992.  True to his devotion to his Guru, Swamiji himself traveled extensively, taught near and far, and has devotees in every part of the world.

As every devotee that has interacted with Swamiji knows, he is a member of everyone’s family, and everyone is a member of his Chinmaya family. Swamiji is an authority on the scriptures yet remains unassuming and easily approachable as he connects with people across generations, languages, and faiths.

Swamiji was instrumental in building the Chinmaya Mission center in Hong Kong and many centers in the USA.  Swamiji is currently resident Acharya at the Chinmaya Mission Tri-State Center. He is also also the president of Chinmaya Mission West and oversees the activities of over 60 Mission centers in the USA and Canada.
Audio Podcasts:
http://www.chinmayavrindavan.org/media/
Facebook Live Videos
https://www.facebook.com/pg/ChinmayaVrindavan/videos
Regular Vedanta Class recordings
https://app.box.com/folder/3089536673
YouTube Channel:
https://www.youtube.com/user/ChinmayaVrindavanVC